For decades people have asked me, "Have you ever been to Santa Fe? There is lots of weaving there."

The only reason I can give for not having gone to Santa Fe before now is that I just wasn't ready.

Oops, I accidentally erased the first picture of the sign post for Centinela Traditional Arts, but I will put it in the next post since I have more pictures to show. Do check out their wonderful website though! 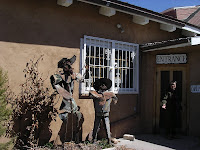 As we drove along the road (see tumbleweed), we passed a few other weaving places. My friends commented that we could stop there on our way back because they wanted to take me to the best one first. 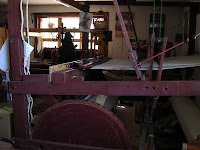 When I walked into the building, I turned to the right into the weaving room rather than into the showroom. There were 4 looms. Pretty amazing! But the loom in the picture below was the biggest loom I had ever seen. 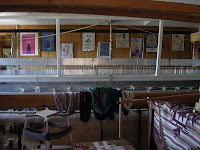 I backed away as far as I could, but I still couldn't get the whole thing into the picture. I believe it has a 12 ft. weaving width. When I finally tore myself away from the loom room, I passed through this entry space on the way to the main showroom. 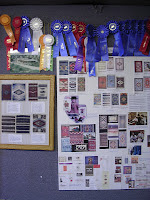 This is merely a section of about 14 ft of ribbons, newspaper clippings, and historical information. I didn't take nearly enough pictures, but I had a lovely chat with Irvin Trujillo, the owner and main weaver. I believe he recognized me as a real weaver. At one point in our conversation, I proudly announced I had been weaving for 48 years. In his quiet and humble manner, he replied that he had only been weaving for 42 years and that he had started weaving when he was 11 years old. After I returned to Seattle and checked out his website, I discovered he was a National Endowment for the Arts National Heritage Fellow 2007

If this doesn't make you chuckle, it certainly gave me a good laugh. It was like sitting next to a famous person on an airplane and talking with them the whole ride and finding out afterwards you had been chatting up the Queen of England.

The difference between New York City and Santa Fe: In New York when I told people I had been weaving for 48 years, they said "Do people still DO that?"

I am already planning my next trip to Santa Fe.

To be continued:
Posted by Bonnie at 9:50 AM

Email ThisBlogThis!Share to TwitterShare to FacebookShare to Pinterest
Labels: Looms, On the Road, Other's Efforts

I visited it also on our trip. I remember it vividly because I noticed that a male weave had his raddle still in while he was weaving. I asked him why? He replied, "why not". Now I generally keep my raddle in and remove the lease sticks. It used to be the reverse. I like this way much better.

I a huge fan of Lisa and Irv's weaving. You can visit their website, as you mention, and they also produced a lovely book a few years back.

It's available on Amazon: