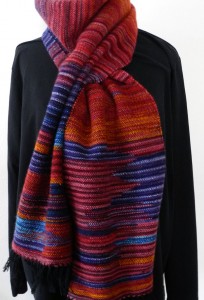 Sara Lamb and I decided to collaborate. We’d each weave a scarf using re-purposed cashmere yarn that my mother and I un-knitted from over 200 cashmere sweaters.


During the last 5 years of my mother’s life, she was unable to knit. Seeking an engaging yarn project for her, I hit upon the idea of un-knitting old cashmere sweaters. Over a 5 year period of time, we un-knitted over 200 cashmere sweaters (I just found out the term “tinking” is knit spelled backwards). I have used this reclaimed yarn as weft to create sumptuous scarves, shawls and blankets. Many of the sweaters are white, and the white yarn has rested in a basket waiting patiently for Sara Lamb, master dyer! Many of you know the current popularity of painted warps and skeins, but you may not know that Sara was painting yarn 25 years ago and is surely in the inspiration of the current trend.

Sara dyed yarn from the white sweaters using reds, golds and blues of a sunset as inspiration.

I sent 16 skeins to Sara, and she divided the yarn in half. She wound her portion of the yarn to use as warp and left mine in skeins to use as weft. Dye, Dye, Dye…And then the exciting part for me, Weaving, Weaving, Weaving! I wove my scarf on my Saori loom using the clasped weft technique. I don’t have a picture of Sara’s finished scarf to show you. 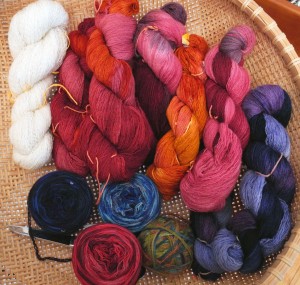 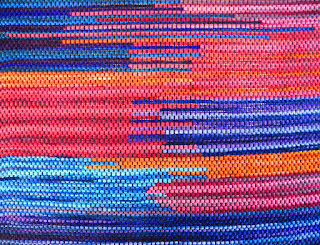 This magnificent scarf is destined for the 2016 fund raising auction to generate support of WARP (Weave a Real Peace} networked projects and, perhaps, inspire other weavers to join in next year.

Posted by Bonnie at 6:19 PM No comments: 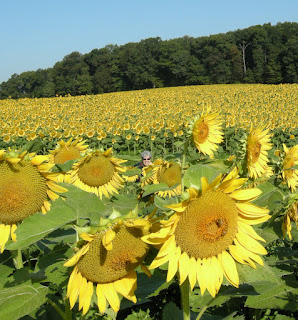 Lost among the flowers, but soon to find my way out!
Posted by Bonnie at 6:17 PM No comments:

As I prepare for a couple of shows in April, I am working on some promotional images. The first show is a group show at Hangin Art Gallery and Cafe and opens on April 4. I will have 4 pieces–scarves/shawls and am trying out 1 image to show off all 4. So Here they are: 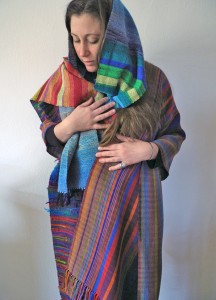 1. Two hands and looking down 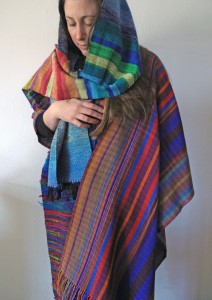 2. One hand and looking down 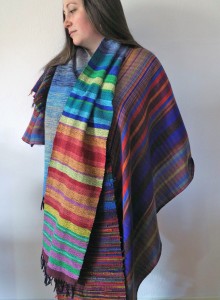 3. No hands and looking away 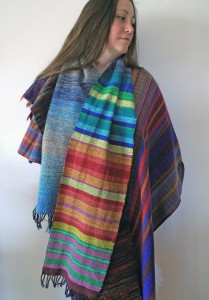 4. No hands and looking in the other direction.

The scarves are woven of cotton (center), tencel (to the right), and cashmere (to the left). Chenille scarf is not pictured. I will send images once they are displayed. 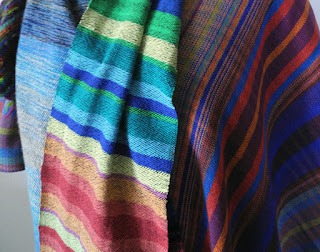 Posted by Bonnie at 6:11 PM No comments: 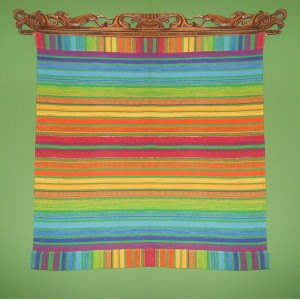 It was a 60” square that Carol, the owner, folded diagonally and wore as a triangular shawl until it got retired to live as a wall piece. I had forgotten that I had to add those edges to make it come out square. And I love that Carol painted the wall just to match the weaving.

Then in the late 90’s, Carol commissioned a replacement 60″ square shawl, this time in 30/2 silk (sett 30 epi) from Treenway Silks. 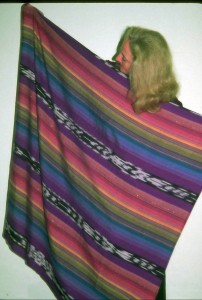 I used the same horoscope draft, but this time I repeat the horoscope 3 times and added Turned Weft Ikat bands to increase the width to 60″. This was woven in 5 panels and invisibly joined. 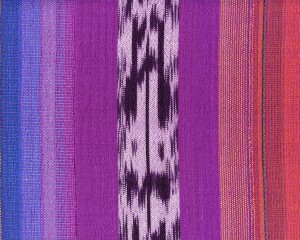 I am sure you will be able to see the join in this detail.
And then in 2011, Carol asked for yet another horoscope shawl. This time she requested bamboo, plus she wanted her horoscope in a neutral palette. 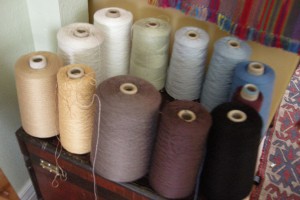 This was really fun AND challenging! I rounded up the most neutral colors I had in Bambu 12 from Cotton Clouds  and put them in a pleasing sequence—with the most “flow”. I also added an “Almost Ikat” striped border for each of the planets. I doubled the warp ends and sett at 24 epi. 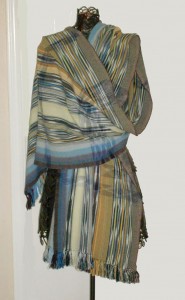 It is hard to believe I used the same winding draft for all 3 weavings! 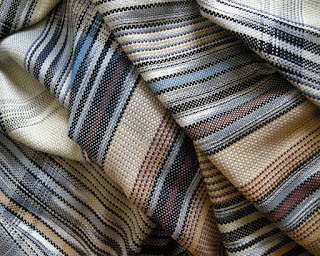 I was so inspired that I must now weave my own horoscope in neutral bamboo! And I suspect a neutral bamboo kit is on the way. Stay tuned!
Posted by Bonnie at 6:01 PM No comments:

2015 is the year I have taken on the ZYG challenge (Zero Yarn Growth). First I weave something from my stash, and then I buy some new yarn for my next project, then use yarn from my stash….etc. You get the picture. I recently saw an inspiring picture on the FB Saori Weaving page, a mouth-watering silk weft/cotton warp poncho. I had a just enough cotton warp left on my Saori loom to weave a scarf. It had never occurred  to me to weave with silk on the Saori loom. In fact, I hadn’t woven with silk in this century!


Into the deepest reaches of my closet I delved, and out came the silk stash. At the bottom of the basket, I discovered a bag of silk bits, slightly longer than thrums, but an extra warp end here and a leftover ping-pong ball size snippet there. Some of this yarn  dates back to the mid seventies!   Most of it is custom ikat-dyed by at least a dozen different dyers, Cheryl Kolander of Aurora Silks  and Michele Wipplinger of Earthues to name a few. 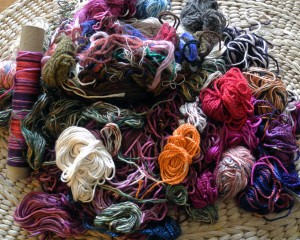 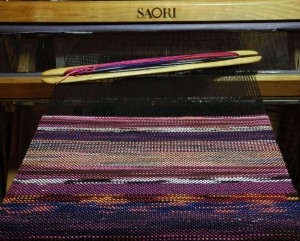 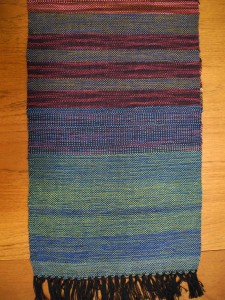 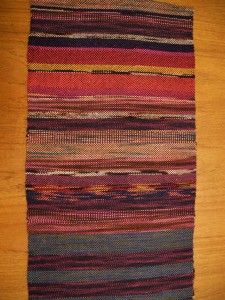 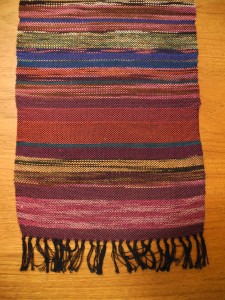 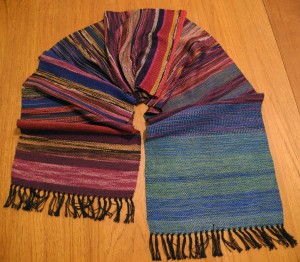 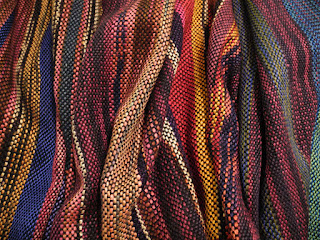 Posted by Bonnie at 5:58 PM No comments:

A Look at Woven Paper Collage

Way back in the 20th century when I was living in Seattle and at the height of my teaching “career”, I was searching for a hands-on activity  for weavers that could be accomplished in 3 hours.(the smallest block of time used by most weaving conferences). I wanted something that would also appeal to spinners, knitters, basket-makers, anyone really. I came up with a workshop I called “Finding the Color Within”. 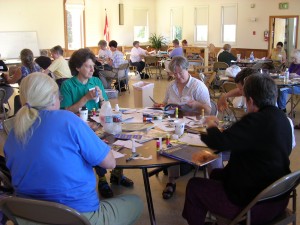 Since my focus is color, I wanted to create a workshop that would strengthen creativity and to free up color experimentation. Here are some examples of those first woven collages.

I taught a bunch of workshops– even one at Convergence in Vancouver.
After I moved back to Montana, I taught, what I now call Woven Paper Collage, at Living Art and several other places around Missoula. 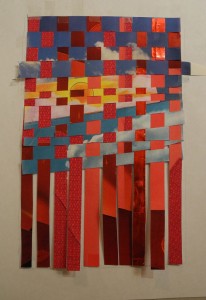 Over the years, what began as a color exercise continues to evolve. Stay tuned for the next chapter….
Posted by Bonnie at 5:52 PM No comments:

Another New Weaver on the Saori Loom 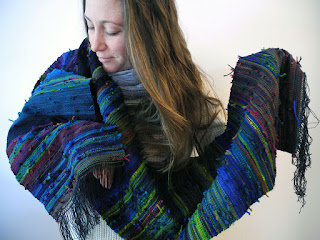 Ruth tied together some of my thrums to create the weft for her first (and hopefully not the last) weaving. 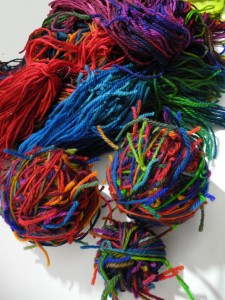 Posted by Bonnie at 5:49 PM No comments: