What Makes it All Worth It

There are hardly words to express my feeling when I look at these pictures. Merin selected the colors for her blanket--the first time I have had the opportunity to engage a youthful recipient in this way. This experiment was most satisfying for all concerned. 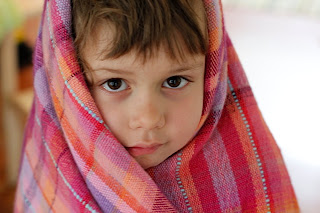 Can you just imagine how wonderful it is to curl up in OUTSTANDING MORAL FIBER--recycled cashmere sweaters. 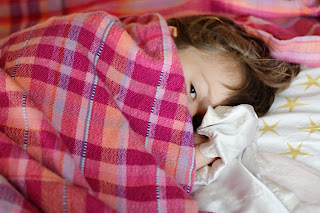 Some of us have been lucky enough to have had that special blanket. I will always remember mine---named, interestingly enough, PINKY 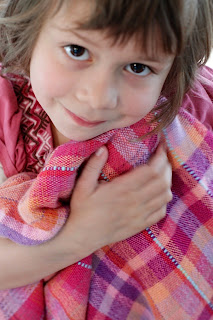 I just returned from a fabulous week at the Hand Weavers Spinners and Dyers of Alberta Conference. The truth of their vision statement was demonstrated in every way.

"A community that supports, promotes, educates and inspires Fibre Arts." 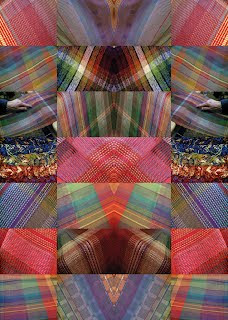 We started off the week with a 3-day Color Horoscope Weaving Workshop. This workshop just keeps getting better. 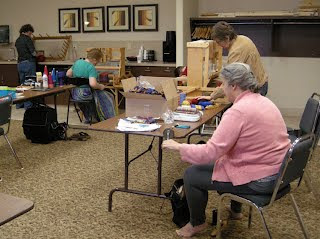 I have to remember to take group shots--next time.

The Intentional Design Class ---image below should be vertical, so turn your head to the side.

This is close to a group shot---the many shades of peace.

And below is the Woven Paper Collage class. I hope to have some virtual quilts as soon as I receive scans of all the woven collages. 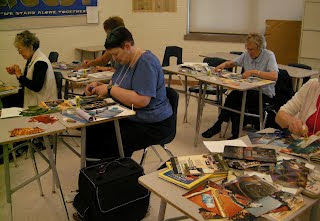 Now pretend you are seeing a short film of everybody at the Conference waving to you.....
Posted by Bonnie at 8:59 PM 2 comments: 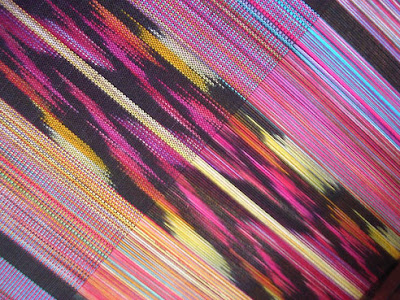 Weaving Magic into a Living Rainbow of Color

Posted by Bonnie at 1:35 PM No comments:

A Plain Weaver Takes a Holiday

Once every ten years or so I like to crank up all 8 harnesses and all 10 treadles just for the fun of it. (and also to see if I really can do it)(grin)

This is an harness block twill, inspired by Coby Johnson, current president of the Missoula Weavers Guild. She presented a program on block twill over a year ago, and I decided I would like to give it a try. Unfortunately the draft is in Gary's loom bench across town, so if you want to draft, you will have to let me know.

I hate to admit that the square is the only part of the warp that I wove as I had to cut this off to make way for the Blessing Blanket. I removed the remaining warp and retained the cross, so I could put it back on the loom at a later date. The plaid (notice the twill) in the background will be the long awaited towels I owe for the towel exchange.

Sue and Sandra don't faint! I haven't finished them off yet. I messed up the sett and had to re-sley, so the really will be more of a square napkin than a towel.

Who said after weaving 52 years, one would stop making these silly gaffs.

Below is the wrapping I made for this warp---spells out the word "peace". There will be more about this in the weeks to come.

There is really much to tell, but since I will be heading off to teach in Alberta in a couple of days, the best I could do is to give you a taste of what I have been up to.

A word about the color choices for the towel/napkin/table mat. A while back I talked about achieving ZYG (zero yarn growth) by alternating projects featuring "stash reduction" followed by "stash expansion". Above is stash reduction.
Posted by Bonnie at 7:22 PM 4 comments:

Perhaps Weaving Marathon would have been a better name for this event. After months of playing around with color wrappings, a palette was settled upon and I began winding a warp for a Blessing Blanket for a, soon to be, six year old.

I thought, perhaps, the girl was old enough to participate in the color selection. I gathered up a couple dozen samples of cashmere, placed them in a plastic bag and send them off to Seattle.

I anxiously awaited their return. As soon as I got the samples, I packed a suitcase and the yarn and went across town to Gary, my Fireside Loom. It is a long story, but Gary and I have been trying a trial separation. On Sunday, I warped the loom. I wove all day Monday and Tuesday. On Wednesday afternoon.......

I cut the blanket off the loom! Wednesday night I tied the fringe. Thursday morning I tossed it in the wash and dryer.

At midday, a friend came by and snapped a couple of pictures, and then off to FedEx and overnight express to Seattle. It was picked up on Friday just in time for the birthday party on Saturday. It was perfect!!

Everything was perfect except for my back which did not appreciate being worked so hard. I think I will not push myself quite so hard in the future, but it sure was exciting.

PS: Gary and I have reconciled, but that is another story for another day