AT THE PEACE FESTIVAL


The 8th Annual Peace Festival at the Garden of One Thousand Buddhas was a lovely event. This was my first time there. It always seemed to happen at a time when I was away (at least the 2 previous ones). We arrived early as people were setting up.


My dear friend Rosemary ably assists me in getting the PEACE panels ready to hang. You can see that it is pretty smokey, but it didn't hamper everyone's enthusiasm for the day. 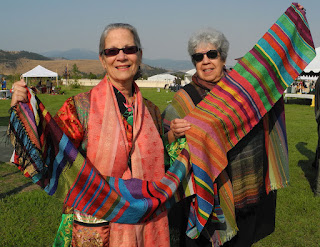 Jacob got the banners flying! 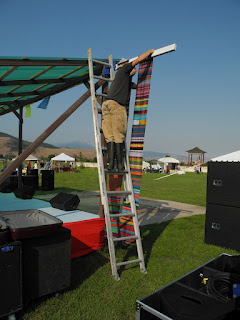 And just as the festivities began, I discovered that my camera's image card was still in my computer back in town. I got this one shot and then---no memory. 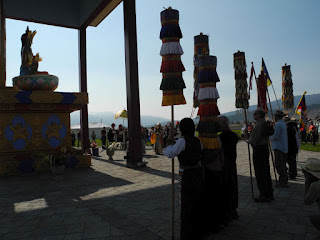 Alas there are no pictures to really show how lovely everything was. 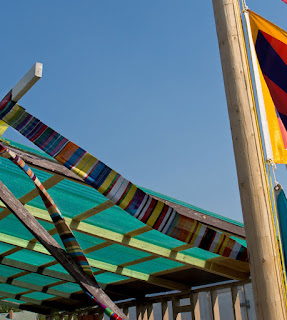 Throughout the day and into the night, the banners continued to dance in what thankfully was a breeze. I am told that winds come up suddenly in this valley and have been known to carry off the whole stage and many an unsuspecting tent. 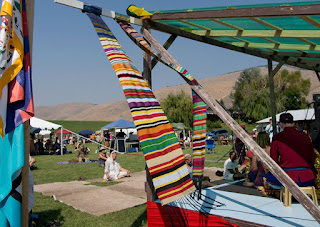 I've been searching to find some more pictures of the festival, but you'll have to go to the Ewam Facebook page.
The banners came home after the festival to say hello to Gary. I will be taking one panel with me when I go to John C Campbell Folk School in a couple of days. 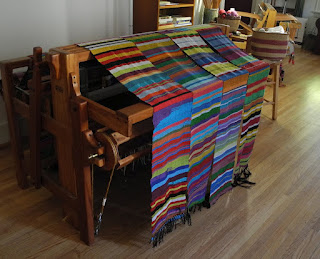 When I return, I will tell you the plans for the banners. Stay tuned.


I've been back home for almost a week. For the first few days, I draped the panels over fences. 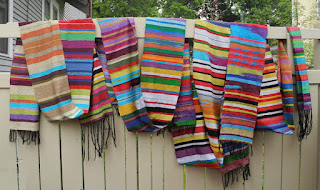 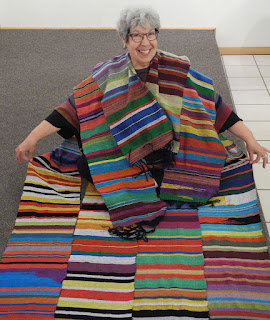 But most of all I have been looking, contemplating, and remembering all the wonderful moments captured in bands of color.
When I first began Weaving Peace, I thought I would be weaving the word PEACE in three languages: ENGLISH; SALISH; and TIBETAN. Soon after I began, an old friend currently living in China stopped by and presented me with PEACE in MANDARIN. Then a cross country bicycler from Thailand gave PEACE in Thai. Who could have guessed that PEACE in SWEDISH, DANISH, and NORWEGIAN are the same? At least that is what the group of Swedish tourists told me. 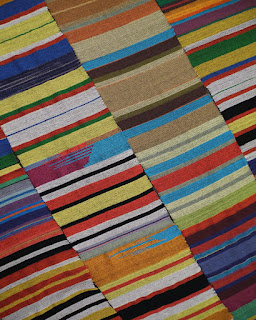 Other languages followed: ITALIAN, PORTUGUESE, GAELIC, HINDI, QUECHUA, RUSSIAN, HAWAIIAN, JAPANESE, and HEBREW. And then the month was over....

Kids from Nkwusm (The Salish Language Immersion School) showed up en mass. I got so caught up in moment, I didn’t get images of all of them. But they wove Peace in Salish in the Medicine Wheel colors. 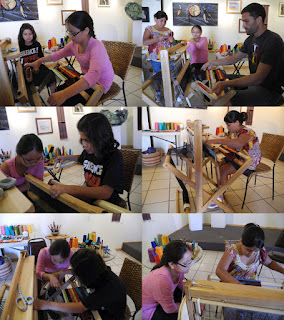 This is what they wove! 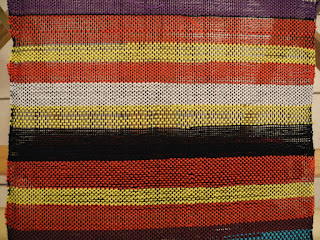 Judy (President of the Killdeer Artisans Guild) showed up and wove. 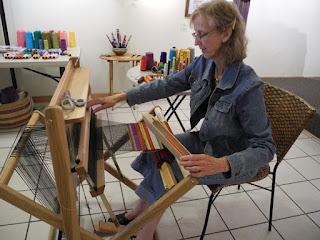 And Karen, another Killdeer member, sat down to weave. 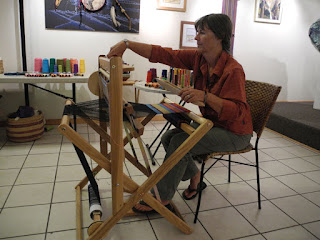 And then Chris (one of the original master craftspeople) of the Garden of One Thousand Buddhas decided to try her hand at the loom. 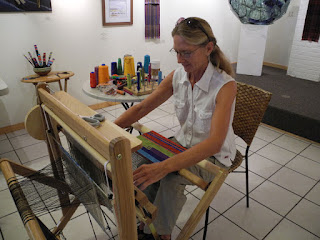 And then Panel #5 was complete! 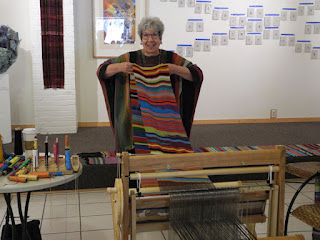 Tomorrow I will show you completed panels as I prepare to take them up to the Garden of One Thousand Buddhas on Monday.

Posted by Bonnie at 5:55 PM No comments: