Rumors of the Big Weave 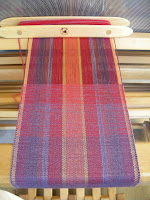 As I mentioned, this a test for the Dalai Lama weaving. I want to see how natural dyed silk combines with recycled cashmere. 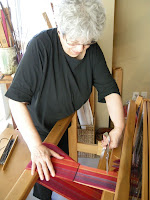 When I test (sample), I always make a scarf. 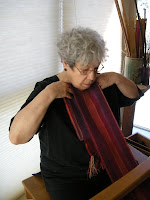 Although this picture is dark, I thought is was adorable.

And, of course, the most exciting moment of weaving! I don't always have someone there to take a picture of this moment, but perhaps I should..... 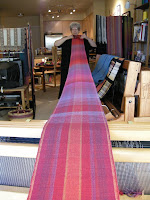 Now to finish it off and launder to see just how it feels.
AND then to begin getting ready to head over to Montana in just a few short days.

Today I got a laptop! Tomorrow my personal assistant Breanne (sometimes model, video maker, artist and Renaissance Woman) will transfer data from this computer to the laptop. Let's hope for a smooth transition.
Posted by Bonnie at 10:25 PM 3 comments:

Email ThisBlogThis!Share to TwitterShare to FacebookShare to Pinterest
Labels: In the Studio, Recycled Cashmere, Woven Words

Here is my first tutorial effort produced. directed, and edited by my friend and a woman of many talents, Breanne Boland. It was lots of fun for both of us.

Giving and Receivingand Planning and Sampling


Before I begin, please check out the Color Horoscope Weaving Booth by Cotton Clouds at Convergence.

Again I was talking with Roberta about my trials in finding a new apartment, and she said "Why don't you move back to Montana?" I COULDN'T DO THAT! I replied emphatically. But I decided to pretend for just one day that I was, indeed, moving back to Missoula, Montana (where I lived for 12 years and moved away from 30 years ago). As soon as I opened to the possibility, it was as if I had fallen in love (you know that feeling). Ten pounds (of the 20 I gained in the past 2 years) fell away as if by magic. I am filled with energy and excitement. I didn't share this sooner because I was remaining open to the possibility that some wonderful living situation in Seattle would appear (didn't happen).

So I have been sorting, tossing, selling and (the most exciting) gifting my possessions in preparation for a new chapter in my life. My last day in this apartment will be August 31. I will be heading over to Montana to Weave at the beginning of August, but will return mid-August to pack in earnest. I will be offering gifts to everyone (especially my blog readers) then.

Meanwhile finishing up----The Memory Mitzvah is complete and ready to go to the framer.

I realized I still have one more weaving to do before I leave. (well, I really have more than one, but this one is going on Grace). Cheryl Kolander of Aurora Silk is natural dyeing silk for the Dalai Lama weaving. I have not tried to combine my recycled cashmere with silk. I have been using the cashmere with bamboo which has a lot more tooth. Earlier experiments combining wool and silk has not been particularly satisfying to me.

While waiting for the silk to arrive (and pawing through my old yarn stash), I found some yarn that Cheryl had dyed for me back in the 80's. Although the yarn size is different from the yarn I will be using, I thought this would make a good sample. 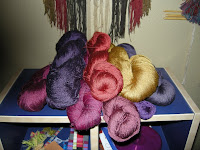 This yarn is totally yummy. I used to weave Color Horoscope Weavings with it when back when. I no longer have the whole spectrum, but there is certainly enough. Of course there is always this fun part---winding balls.

And the next fun part, winding warp. (I will tell you about this warp in a later post)

And the final fun part of dressing the loom. Grace is excited to be working again---as am I.

I received a comment from Lindsey asking if I will be selling instructions for the Dalai Lama's horoscope. I had not thought of it, but now that I have, I believe that I will make the draft available on my blog (once I figure out how to do that) . Thanks for the idea, Lindsey!
Posted by Bonnie at 10:03 AM 2 comments:

When I first thought about creating this special weaving, I thought I would weave the Dalai Lama's horoscope here in Seattle. While I was weaving my towel project, I got the idea of performing the Weaving actually in the Garden (outdoors, I have never woven outdoors). As soon as this image began to form in my mind, I found out that my landlord wanted to move back into my cozy little apartment. I was going to have to move AGAIN after just 2 short years. Where to now?

Email ThisBlogThis!Share to TwitterShare to FacebookShare to Pinterest
Labels: Garden of 1000 Buddhas, Service

WEAVING IN THE GARDEN


I know that I have posted this image before, but since the original photo was taken of me dancing in a field just outside of Arlee, Montana in 1970 (I can't believe it is 40 years ago!), it is extremely relevant to "Weaving in the Garden" 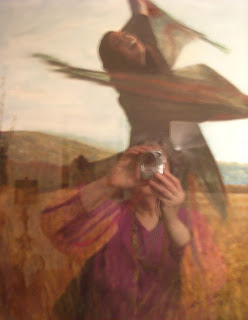 When I got my first digital camera, 8 years ago, I practiced learning how to take pictures of framed artwork. When I shot this, I didn't realize my reflection would appear on the glass of the frame.

To me this image speaks of time, ideas, and the eternal.

When Roberta told me about the Garden of 1000 Buddhas, I knew immediately that I would weave the Dalai Lama's horoscope as my contribution to raise money for the completion of this amazing project.

So when I announced: A JEWISH WEAVING PRIESTESS IS GOING TO THE GARDEN OF 1000 BUDDHAS IN THE HEART OF THE FLATHEAD RESERVATION IN MONTANA TO WEAVE THE DALAI LAMA'S HOROSCOPE FROM THE NEW MOON TO THE BEGINNING OF RAMADAN it set in motion many unforeseen events.

Email ThisBlogThis!Share to TwitterShare to FacebookShare to Pinterest
Labels: Color Horoscope Weaving, Garden of 1000 Buddhas, On the Road

My dear friend Roberta sent me this little movie a couple of months ago. After watching it, I decided to Weave the Dalai Lama's horoscope as donation to help raise money for the completion of the garden. Once I made this decision, my life began to change in ways I could never imagine.
More to follow:

Email ThisBlogThis!Share to TwitterShare to FacebookShare to Pinterest
Labels: Ideas, On the Road, Service

Peggy Osterkamp Does it Again!


Whether you are a new weaver or an experienced weaver, a weaving student or a weaving teacher here is a must have new book for your library! WEAVING FOR BEGINNERS (an illustrated guide) by Peggy Osterkamp 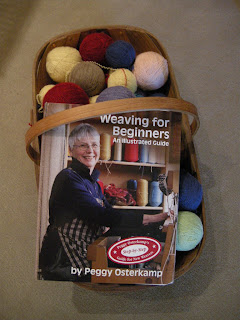 I can't say enough positive things about Peggy's latest book. It tells absolutely everything all wonderfully organized, beautifully illustrated and clearly written. For anyone who wants to learn how to weave, get this book. Weaving for Beginners serves as the perfect text book for teachers. There are hundreds of permanent classroom demonstrations students can refer to at home.

I found myself (after 50 years of weaving) saying over and over as I turned the pages---"Oh, that's how you do it!"

I guess you can teach an old dog new tricks (grin)

Peggy will be signing books in the Cotton Clouds booth #417 and the Lone Star Room at Convergence.
Posted by Bonnie at 11:08 AM 3 comments:


The Georgia O'Keeffe Color Horoscope Weaving in Bambu 7 with "Almost Ikat" accents is finished and shipped off to Cotton Clouds---my almost last preparation for the booth at Convergence. Cotton Clouds has done an amazing job. Take a look at this. Many blessings to Irene for all of her efforts.

I couldn't find a model before I had to ship the shawl, so I had to content myself with a series of close-ups. 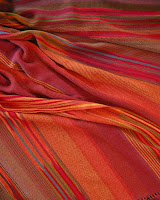 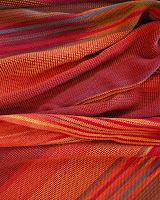 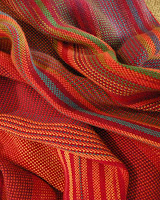 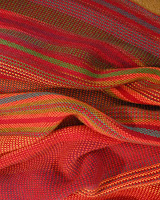 Tomorrow I will send an exciting book review and then a product review AND THEN the real excitement in my life.
Posted by Bonnie at 9:11 AM No comments:

Meanwhile, I glance around the apartment and notice many items I haven't touch since I moved here 2 years ago. Do I really want to move these things AGAIN?! I have this cedar chest (a wedding present when I got married in the early 60's. The chest has help up much better than the marriage, but the contents....as they say (Oi Vey!)

I have things in there that go back to before my marriage. I really don't need or want these "treasures" any longer.

So I decided to have an open house and invite my friends and neighbors. Some things I will sell, but many things have a combination of no value and priceless. It will give me great pleasure to know that someone who will love and cherish an items of mine will get it while I am still quite able to take joy in the giving.

I am having a blast arranging "things"

And hanging things on my main wall.

And moving things around.

One of the amazing aspects of this venture is that as I divest myself of stuff, I seem to be divesting myself of some extra pounds that have crept back onto me while I wasn't paying attention.

It turns out that the place I used to live in is having a yard sale next weekend, and they told me that I could be a part of it. (The things on the wall are not "yard sale" things. You should see the yard sale things.) If my last move was a Festival of Moving, this one is bound to be a Movapalooza.

In between sorting, tossing, shredding, boxing and gifting, I am finishing up the last things I need to send to Cotton Clouds for their Convergence Booth. I will have a picture for you before the last weavings are sent off.
Posted by Bonnie at 7:04 PM 2 comments: