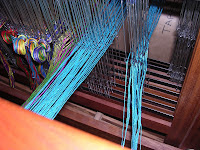 When I got to the halfway mark in the reed, I realized I didn't have enough dents. Ames had written a comment asking about reed size which made me stop and consider how I was going to put a 42" warp in a 40" reed. Although my loom is 48", only my 12 dent reed is 48". I thought by unthreading and removing an inch of the border on each side, I would have enough.

When I got to the halfway mark in the reed for the second time, I realized once again I didn't have enough dents! Did I miscount? Did I make a mistake in the initial winding? Am I crazy? 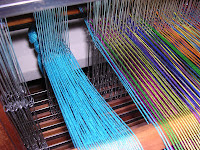 Then it hit me. Duh! There are 10 planet thread groups which are not doubled in the reed. It is as if the weaving is 19" wide instead of 18" wide. (doubled for the baby blanket makes the warp 38"). I would have to remove the entire border. I did leave 4 turquoise threads at each edge as a selvage, and I will add a floating selvage thread as well. I plan to use a turquoise weft to give a nice look to the edge as long as I don't have a border.

I plan to put the cross back in the borders and re-chain them for use in another weaving sometime. Perhaps I will invest in a 48" 10 dent reed:) 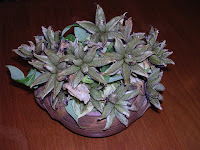 I finally cut the Tree Peony dead heads. I was surprised to discover I had had 17 blooms.
Posted by Bonnie at 9:49 AM

Email ThisBlogThis!Share to TwitterShare to FacebookShare to Pinterest
Labels: In the Studio

This is one mistake I have yet to make. I guess it is just a matter of time......