As a "virtual" gardener, I thought I would show off the volunteer poppies that crept into my rock garden. Unable to decide what to do with some beads I collected over the years and all those "special" pebbles (I'm still pondering my shells), I scattered them throughout the garden. When my favorite young lad visits on Friday while his mother digs up a little of the black bamboo, I will give him a special treasure hunting basket. 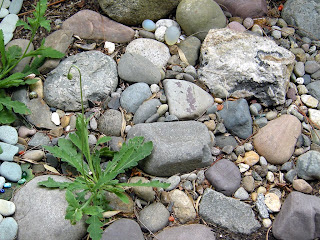 It may not seem like I am staying on target, but I am totally focused on the Festival of Moving.

On Friday in celebration of summer and 18 happy years in my apartment, I am planning a mini-Potlatch. If I get it together, I will make it "virtual".

A ceremonial feast among certain Native American peoples of the northwest Pacific coast, as in celebration of a marriage or accession, at which the host distributes gifts according to each guest's rank or status. Between rival groups the potlatch could involve extravagant or competitive giving and destruction by the host of valued items as a display of superior wealth.

[Chinook Jargon, from Nootka p'achitl, to make a potlatch gift.]

Last time I moved long-distance, we threw a going-away party for ourselves and gave away bags of frozen vegetables as gifts. It was a definite hit with the family with five kids.

Love the idea of your young friend discovering lots of sparkly bits in your garden, how fun for you both. The Potlatch is an interesting idea it would be wonderful to join in and help you celebrate both the 18 years that have passed and the many years that are yet to come. Enjoy your feast of fun. Best wishes, Martha

A certain young man has been waking up for the last three days asking: "Is it a Bonnie Tarses day yet?"