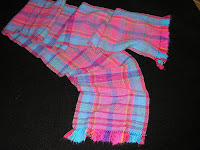 Here is the sweet little Bambu 7 and recycled cashmere scarf all washed and ready to go. These aren't my usual colors, but I wanted a chance to use the pink and lavender cashmere. I did notice after I washed this piece that the different weights of cashmere caused the edges to pull in and bow out at the color changes, but I decided that was part of the charm. 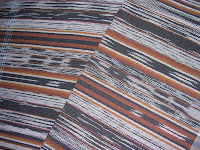 I cut the 2 towels in half before I washed them because I thought the two different twists of cotton would not do well in the washing. Happily I was wrong, and the piece on the left washed up beautifully. The commercially dyed yarn is not as soft and cuddly as the ikat dyed yarn, and these towels do not feel as yummy as the first two test warps. 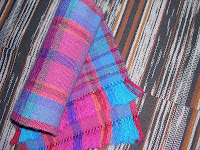 My experiments do not always come out so well.

I just received this poem from a friend and would love to share it with you.

I dreamed of Orchil, the dim goddess who is under the brown earth, in a vast cavern, where she weaves at two looms. With one hand she weaves life upward through the grass; with the other she weaves death downward through the mould; and the sound of the weaving is Eternity, and the name of it in the green world is Time. And, through all, Orchil weaves the weft of Eternal Beauty, that passeth not, though its soul is Change. This is my comfort, O Beauty that art of Time, who am faint and hopeless in the strong sound of that other weaving, where Orchil, the dim goddess, sits at her loom under the brown earth.

Email ThisBlogThis!Share to TwitterShare to FacebookShare to Pinterest
Labels: Fiber, In the Studio

What a wonderful poem! Thank you so much for sharing it with us.

What a truly beautiful poem, thankyou for sharing Bonnie. I am a regular reader of your blog and though I am a tapestry weaver, your work ethic and love of colour and design are inspirational.
Thankyou.
Pam.