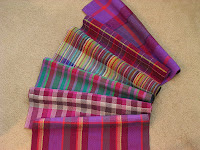 Here is an array of towels woven in 10/2 mercerized cotton using my Woven Words technique. Mostly I weave towels as gifts. From the bottom up we have: Tess Archer (celebrating the birth of my grand niece); Matt & Marla ( celebrating cousin Matt's marriage to Marla); Virginia (a fund raising project for a Virginia Harvey video produced by the Northwest Designer Craftsmen Living Treasures Video Project; alphabet sampler (just for fun); Paper Towels ( in honor of Cis and Chic Paper, my favorite Aunt and Uncle); and Tarses Tartan (for my immediate family).


I don't have any of my older ikat towels, but I have started a new series ikat towels which will become the towels I will use in my ongoing towel exchange. 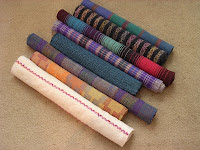 TOWEL EXCHANGE: It goes like this-- You send me a towel, and I will send you a towel. Above are some of the towels I have received. I use these towels all the time. I also have lots of handwoven napkins. Many of the towels and napkins are interchangeable. It is fun when I have folks over for dinner to have them select their napkin as no two are alike. 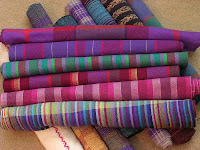 I don't use the Woven Words towels except as examples when I teach. Well, that's not completely true. I carry the Tarses towel in my purse for those times when I wish I had a towel with me.
Posted by Bonnie at 11:18 PM

I love your towels. Hmmm, maybe you will get one in the mail from me in a couple of weeks. I've discovered that weaving towels are a great way to sample new techniques and to practice what I already know. :)

The color again! I am enchanted by color.....

I think perhaps I'll follow your lead--I'm sick to death of the color brown, now that I'm 25 yards into my warp... I need some COLOR!

I have two family tartans--Hall and Young, both of which are pretty attractive. I was going to make scarves for the family for Xmas, but a set of towels might be a nice variation as well.

And brava on your commitment to weaving every day!

I'd love to exchange towels with you. How do we go about doing this? I didn't see your email address/address anywhere, but maybe I'm missing something...

Hi Stef,
If you click on "view my complete profile" (located along the left margin), you will then see the words "email" and "website". If you click "email", you will be where you want to be. I'll be looking forward to hearing from you.