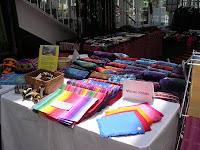 Little by little, parts of my July trip have begun to integrate into my weaving life.

After I left New York, I took a train up to Massachusetts to the NEWS Conference. Among the many many wonderful experiences, the Mayan Hands booth in the vendors building has been in my thoughts today.

Mayan Hands is a fair trade organization that has been working with Mayan weavers since 1989. We now work with approximately 200 weavers, organized in groups of 12 to 50 women, living in eleven different communities around the western and northern highlands of Guatemala.

I am not much of a traveler, but back in 1974 I did visit Guatemala. I thought it would be wonderful to visit a country that devoted so much of its energy to weaving. I also had this mistaken notion I would look Guatemalan. I actually looked more like the Guatemalan version of a Martian, at least that is how it seemed from the expressions on their faces. I also discovered just how limiting for me it is to not speak the language. I know many people seem to be able to just get along, but I realized I was not one of those people. But most of all, I was undone by the poverty I encountered. To be able to create such magnificent weaving and not have much more than the beautiful handwoven clothes on your back was almost more than a struggling first world weaver like myself could take in.

I hadn't really thought much about that trip until I encountered Brenda Rosenbaum,
a wonderful woman who was in charge of the booth. Brenda told me I had a Guatemalan spirit, and I think she might be right. Many people tell me my weaving looks very Guatemalan.
Brenda told me I should come to Guatemala and work with the weavers. Now you know why I have been thinking about my previous trip.

I am still a Martian, but perhaps there is some way I can help. Maybe by writing about this, some ideas will gel. 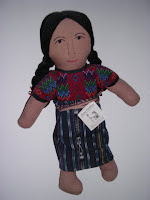 Here is a strange coincidence. Meet Manuela from Chichicastenango. I found her in the window of a shop around the corner from me. I walked by her for several days and finally went in and purchased her (a year and a half ago). She has been sitting in my studio since then watching me weave. I don't think I ever read the tag, but after I returned from the Conference I did. On the back it says: Maya Doll Project created by: Maya Traditions
I checked out their website and discovered a most amazing thing: Maya Traditions and Mayan Hands two small fair trade businesses joined together to form a nonprofit named Associacion Tejedoras Unidas ("Weavers United")

Manuela is a very magical and beautiful doll who has been quietly working her magic in my weaving studio. There is so much more to say, but I haven't figured out the words yet.

Email ThisBlogThis!Share to TwitterShare to FacebookShare to Pinterest
Labels: Ideas

Wow...until I enlarged the photo of the table display, I thought it was your weaving from previous posts! Perhaps you do have a "Guatemalan Spirit"!

What does Manuela mean, I wonder? Does the term 'man...' mean 'hands' in Spanish as it does in English? As in "the work of your hands"? Interesting.

I think it is all about color. Native South and Central American art is color all over. Our countries are colorful, we dream color, live color, wear color. If you look at textile art in Colombia, Peru, Ecuador, Bolivia you end up seeing that things are similar. We are very noisy too!
Music and color! Red, yellows, oranges, all over

Oh and to answer Valerie's question Manuela is a name a female name. Manuel is the male and Manuela the female. You find both. It might come from Emmanuel from the Bible, not sure.

Yes, Manuela is the name of this particular doll. Each doll has its own name. I don't know if the maker named the doll or if Maya Traditions assigns a name to each doll based on the basic design of the weaving that comes from each village.