The Many Shades of Hope 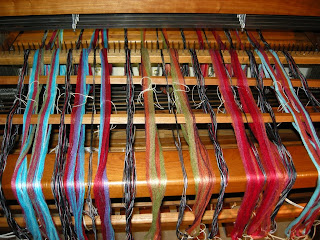 Shortly after the election back in November, I noticed such a outpouring of hope I decided to create a weaving entitled "The Many Shades of Hope". I rarely begin a weaving with a title, but we live in rare times.

It has taken a couple of months of thinking and designing to come up with a plan. The idea is to weave a shawl or MobiQ and have enough left over to cut up for little lavender pillows. The radom space-dyed yarn between the words will be used for the seams. I don't know if you can see the little red stripes, but they are the cut lines. The goal is to design something to cut apart but looks good as a whole uncut piece. It was challenging to have such variance of color. I moved the sections around quite a bit, but I think this configuration is the most pleasing. 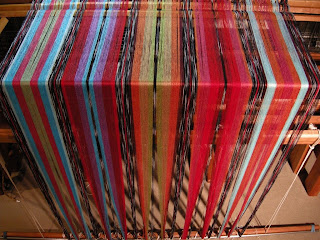 I settled on 5 different mirror imaged color ways of the word HOPE. I used the 4 favorite colors of mine (second from right) and 4 of my friends. 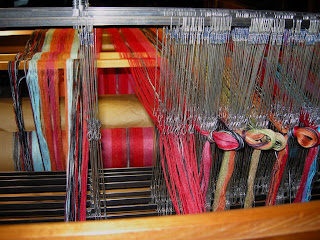 I like to show my back to front warping (using a raddle), and I love taking pictures of warp through heddles 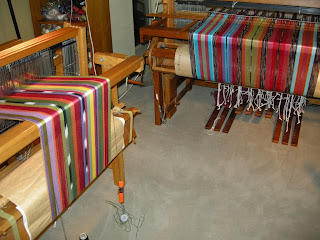 I actually like having both looms set up this way since it is so easy to photograph both warps at once. By the way, I just finished weaving the smaller warp. Pictures to follow.
Posted by Bonnie at 1:22 PM