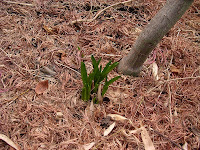 In my urban patio setting here in Northwestern USA, it is not too early to find the volunteer hearty Wood Hyacinth getting a jump on the season. Apparently squirrels do not care for their taste as they devoured all of my crocus. 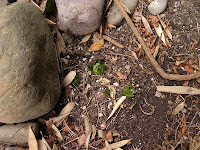 Here are some other volunteers, those big aromatic purpley blue hyacinths. They are not as far along as the wild variety. (also squirrel proof)

Celebrated by the Druids as the festival of the lactating sheep. Herd animals have either given birth to the first offspring of the year or their wombs are swollen and the milk of life is flowing into their teats and udders. It is the time of Blessing of the seeds and consecration of agricultural tools. It marks the center point of the dark half of the year. It is the festival of the Maiden, for from this day to March 21st, it is her season to prepare for growth and renewal. Brighid's snake emerges from the womb of the Earth Mother to test the weather, (the origin of Ground Hog Day), and in many places the first Crocus flowers began to spring forth from the frozen earth.

According to lore, if the groundhog emerges from his burrow on February 2 and sees his shadow, he will be frightened back into his hole, presaging another six weeks of winter. A cloudy day -- and no shadow -- means winter will end early.

The results so far:


It was cloudy here when I went out to take the pictures on my patio. I did not see my shadow. I vote for Spring!

Email ThisBlogThis!Share to TwitterShare to FacebookShare to Pinterest
Labels: Nature

Well, it was sunny here in San Luis Obispo, CA...so it's winter for us. However, winter in SLO is not really that terrible!

Oh, this is great. I was only familiar with Punxsutawney Phil, who makes it on the news around here every year. I suppose it's a regional event anyway!