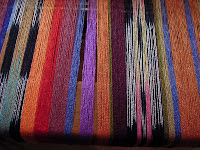 As I was winding back this lovely warp, I noticed that I had left out 3 colored stripes (between the purple and orange stripes in the center of the picture) and the orange, olive and brown stripes should be to the right of the ikat stripe rather than the left. The error appears in the word "optimism" (begins with the very bright orange stripe "o", the red is "p", the dubonnet is "t", the blue is "i", and the purple is "m". I completely left out "ism" and put the word "new" there instead of putting "new" next to the word "beginning". 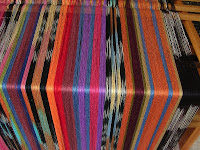 So I fixed it because I could and because I should have double checked my Woven Words before I started winding back. Of course, I am the only one who would ever know an error had been made. 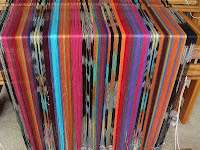 Whew, that's a relief! Now I am back where I started, ready to move forward tomorrow.

I make as many (if not more) mistakes as I ever have, except now I see them as a humbling device. My mistakes have become more sophisticated over time, and I now believe there are an infinite number of errors to be made. I always learn something from my errors, and one of my great joys in weaving is knowing I CAN fix most every one. Though once in a while, I do have to cut my losses, and it is good to know when to just cut a warp off the loom and move on.
Posted by Bonnie at 10:21 PM

Email ThisBlogThis!Share to TwitterShare to FacebookShare to Pinterest
Labels: In the Studio, Techniques, Weaving Philosophy

It is a very insightful entry! Thanks!

I used to not mention when I slipped up because the results were always so good. I am glad my "duh" moments are helpful.

I've retold your story about when you shared space with the woodworker and after complaining that you had to unweave a mistake, he commented, "Oh, for the many times I wish I could uncarve."

Always a good reminder that we can indeed fix most any error that we need to, it's just a matter of time and value.