The Power of Weaving 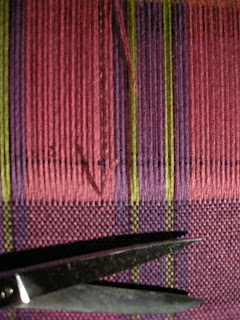 When I ask weavers what they don't like about weaving, most tell me the thing they like the least is making a mistake. (actually many say they don't like dressing the loom, but that is another story) When I accidentally cut one of my warp ends while weaving today, I realized something so very important. In weaving (unlike most other things in life) there is practically no mistake that can't fixed if you take the time. 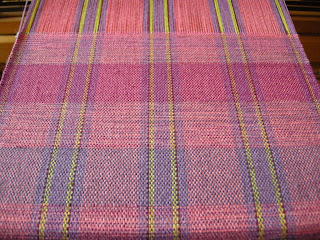 Actually this is the scarf BEFORE I cut the warp end. For some reason the pictures came up in reverse order.

Although I fixed the warp end, I didn't photograph my method. If enough people request it, I will show you how I fix a broken warp thread. It involves a film can and a T pin.

I will share my dialogue: "Oh, I just cut a warp thread! Thank heavens I only cut one!! I really can't believe I did that. This is obviously a message from the Weaving Goddess telling me to pay attention. Message received."
Posted by Bonnie at 8:48 PM

Yes, the weaving goddess breaks in whenever I don't pay enough attention to what I am doing. A very jealous creature she is.

I would love to know Hhow you fix a broken thread in your warp. Blessings JOan :)

Me too. I'm always interested in how other weavers do things, including fixing broken (or accidentally cut!) warp ends.

I considered cutting one of the warp threads just to show you how I fix it, but then I thought that would be silly of me. Let me sleep on this tonight and see how I feel in the morning. I have a friend who just got a camcorder. I thought it might be a good idea to have him come and make a little movie of it and put it on UTube.