So What Have I Woven Lately 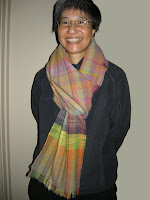 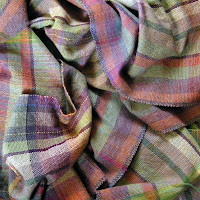 This the same weaving right after I cut if off the loom. Tomorrow I will post a picture of it on the loom. (Bamboo warp, cashmere weft). I haven't figured out how to add pictures once I have already uploaded some.

Did you ever seen that really strange movie called Memento ? It is filmed all out of sequence, like this post (but that is the only similarity). I will get back into the swing of things eventually, but I liked this scarf so much I had to show you before it went to its owner.
Posted by Bonnie at 9:52 PM

Email ThisBlogThis!Share to TwitterShare to FacebookShare to Pinterest
Labels: In the Studio, Recycled Cashmere

Very pretty! And your post is no where near as disturbing as Memento!

It turned out quite nice to say the least. This weekend is our Lace Weaving workshop I can't wait! The loom is ready, it is going to be a very long week.

and well she ought to be happy! It's just lovely.

It is so interesting to see the play of colors on and off the loom. It is beautiful and from the big smile on Jill, she was pleased too.