Historically, temari were constructed from the remnants of old kimonos. Pieces of silk fabric would be wadded up to form a ball, and then the wad would be wrapped with strips of fabric. As time passed, traditional temari became an art, with the functional stitching becoming more decorative and detailed, until the balls displayed intricate embroidery. Temari became an art and craft of the Japanese upper class and aristocracy, and noblewomen competed in creating increasingly beautiful and intricate objects. Rather than follow an intricate pattern, well, there is no pattern—hence the “drunken”. 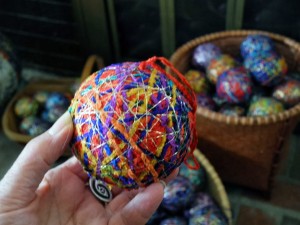 In addition to the cavalcade of scarves, I created 150 ornaments for my holiday sale and beyond. These are just a few. 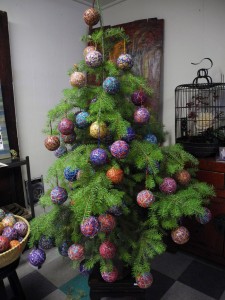 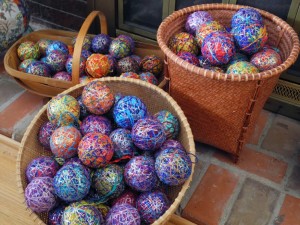 I never get tired of looking at them, however, my wrist gave out after 50 of them, and I had to enlist help from friends and from The Missoula Weavers Guild. Thanks to all!
Here are some great tutorials for making sober temari balls YouTube 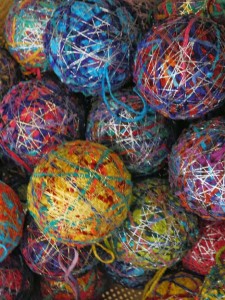